See how hourly hotels represent the nostalgic and romantic side of the city through cameras and lyrics... For lots of folks, summertime is their most anticipated season of a year. Summer, to many people may connote leisure, beaches, iced beer, sweet love, and the taste of bitterness that comes after. Summer in Hong Kong is always unpredictable. You might now be bathing in the sweltering heat, while in the next second you will find yourself under a sudden shower...

Last night in the rain I was walking home after a late diner. Under the flashing neon light was the never-ending flow of crowds and traffic. From deep down the alleys came the murmurs of some elderly ladies. This is what Hong Kong is, I thought to myself. It’s like an endless kaleidoscopic dream, and anything you can expect. The vibes of such a rainy night kind of pulled me back to the portrayal of the dreamlike Hong Kong in Wong Kar Wai’s films.

Wong Kar Wai is one of Hong Kong’s most established directors. Wong’s films are visually and stylistically unique, known for his stream of consciousness style of narrative. Life is brief, love is fleetingly beautiful, people come and go, and at the end you are nothing more than a lonely, wandering soul. To me, this is a common theme for many of Wong’s movies. It is as if the femme fatale often came at a rainy night. Hardly could the darkness of night conceal her exceedingly fascinating charm, even just a glimpse would do. But before you knew it, she just disappeared at the end of the street.

Love hotels are an element frequently used in Wong’s films. They are often the places where the story unfolds, and where the protagonists get entangled in the snares of love. They are places that denote desire, caprice and instability, a commonality also found in the city’s temperament.

“Will you love me forever?”

Hong Kong, known for its very limited usable land, is a place where space is one of the most valuable resources. This is one reason why Hong Kong’s hotels are so highly priced, which also contributes to the growth of Hong Kong’s ‘shi zhung fong’ culture. ‘Shi zhung fong’, literally ‘hourly room’ in Cantonese, refers to love hotels or hourly hotels in Hong Kong. In many people’s impression, they may be grimy, dim and damp, hidden from daylight. They are often associated with such negative ideas as cheating in a relationship, underground prostitution or compensated dating. However, this may not be so much the case in Hong Kong, at least not at the present days. With the changing of time and people’s increasingly open-up minds, those ‘shi zhung fong’ have long been part of Hong Kong’s culture.

Apart from movies, love hotels are also written about in Hong Kong’s pop songs, for example in Romance in Kowloon Tong by My little airport, a Hong Kong based indie pop band.

As is described in the lyrics, first experience at an hourly hotel is always exciting yet nerve-racking. What will happen to this relationship? None can tell. It is sometimes the uncertainty and unpredictability of love that make it so captivating, you’ll have to admit. Pop culture is arguably a mirror of reality. As are portrayed in movies and songs, shi zhung fong is part of many young Hong Kongers’ life. Since the last century, love hotels have become a common memory for generations in Hong Kong. Those hourly hotels have witnessed countless starts and ends, sweets and bitters, and the vast vicissitudes of life on this land. Nowadays, plenty of hourly hotels of modern, novel styles have emerged, ranging from high-end hotels to private hostels. Here’s our pick of three that should be worth your try.

This hotel is for those who like some atmosphere. Its rooms are spacious, clean and each designed with a bit of creative flair and with a particular theme as well. If you fancy a different experience in a themed room, this would be your choice.

This snazzy hotel in Tsim Sha Tsui is delicately furnished and decorated. Its soft, romantic lighting also adds to the cosy atmosphere. This hotel is also famous because of its appearance in Hong Kong’s local film, Love in a Puff. You will have access to free wifi, jacuzzi and parking lots.

This hostel is designed with a home-like style, and is dedicated to making you feel at home. The rooms are small but tidy, with comfortable beds. It is conveniently located in Tsim Sha Tsui, within 5 minutes’ walking distance from TST MTR station. Lots of dining and shoppig places to choose from around the hostel.

If you still find it embarrassing to go straight into an hourly hotel, we have another suggestion for you. Try booking a hotel or hostel by the hour during daytime via Flow App! Various timeslots are available with low prices. Or if you are just tired after hanging out in the city, you can also get a room to rest with simple taps of fingers! Stop hesitating and give it a go!

Flow – the "Platform for Space" where travellers can book hotels or office space by the hour or timeslot, enabling flexibility in check-in time & duration of stay.

Why book for the whole day, if you need to stay for just a few hours?

We should consider every day lost on which we have not danced at least once. ——Nietzsche 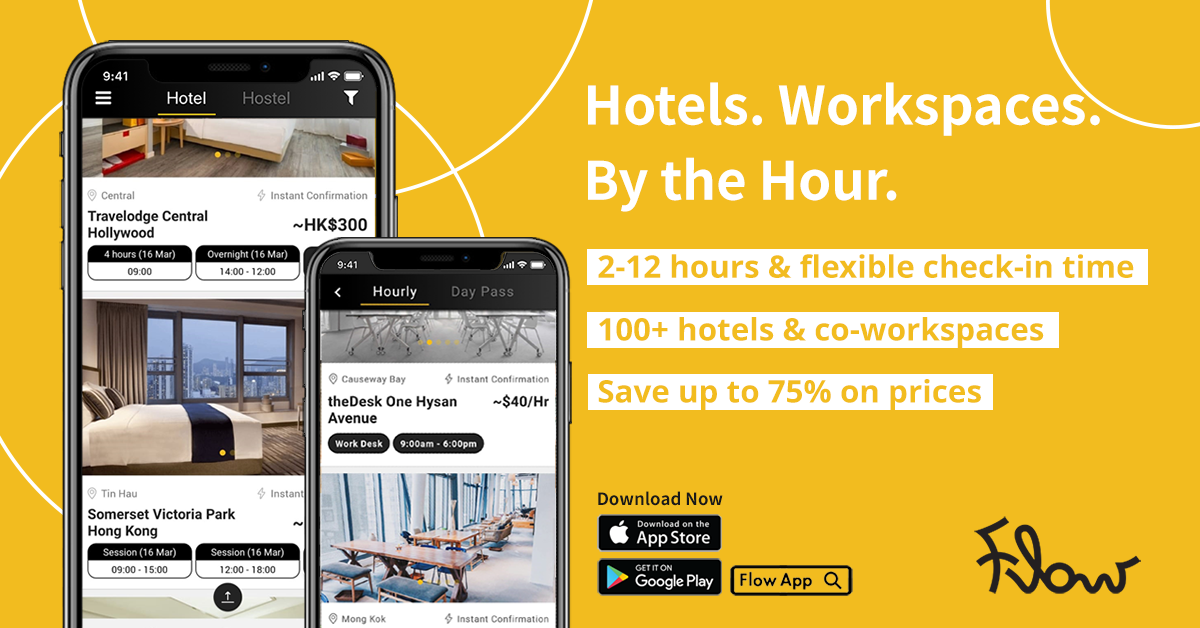